Why does using {value: 1} in a test results in an exception with no text?

I'm completely new to smart contracts in Etherum. Using Remix I created a small contract that does nothing except require msg.value == 1:

Then I created a test that just calls it and asserts a nicer message if it fails (I'm not sure why, but by default the error shown by the test framework doesn't include the string from the error):

As expected, this test fails with "Must send exactly 1". So, I then tried to send a value of 1 with the test, using the details from "Testing a method involving msg.value":

However this fails with an empty error: 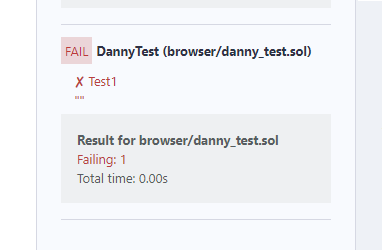 I've tried all sorts of combinations all evening, but haven't been able to make this work. The version of the compiler shown in Remix is 0.6.8 (though I'm not sure if the unit testing plugin uses the one selected here of its own).

Because your DannyTest instance does not have enough funds to pass that 1 wei.

What's the best way to test the time based aspects of your smart contracts?

difference between describe and context

How to Unit test modifiers in Solidity

How to run a test file (.go) from ethereum source?