I'm trying to understand how the Verilog scheduling algorithm works. The below example outputs 0, xxxx and not 1010. I'm not clear why. If I do put a delay before $display, it would output 1010.

Same output, 0, xxxx, for the below example:

Can someone please confirm or explain to me a step-by-step flow of the algorithm below (from Clifford Cummings) as it applies to the examples above? 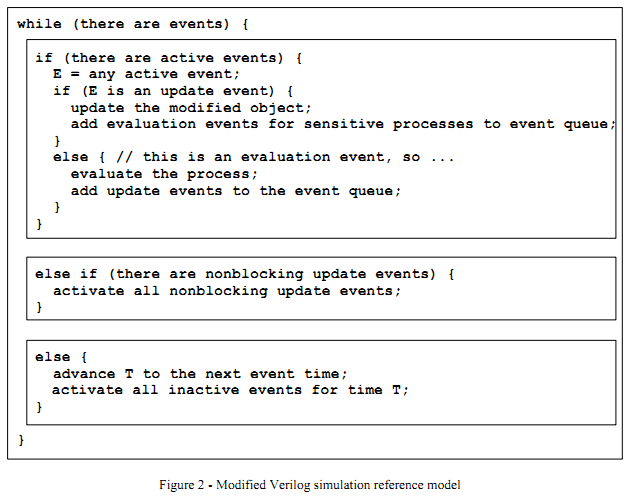 You are correct in saying that the non-blocking assignment(NBA) and continuous assignment(CA) act like two-step processes, because they are. The problem is what you are calling "the next time-step" is not an advance in time; it is an iteration of the while() loop without advancing time. This is usually referred to as a delta-step.

When using a CA, you are creating a separate process that activates anytime the RHS changes it makes an assignment to the LHS in the same active region. The initial and CA are two independent processes, and the ordering between statements in the active region is non-deterministic. So whether you see the old uninitialized value of y of updated value of y is a race condition. And you will see differences between simulators depending on how they optimize this code.

how to configure gpio for accepting input clk and to generate clk on the gpio ?, what is the wrong with following code

Design a circuit from logic gates, flip flops and/or multiplexers