I have a capacitor in series after a light dimmer. How could I calculate the voltage and current through the capacitor? 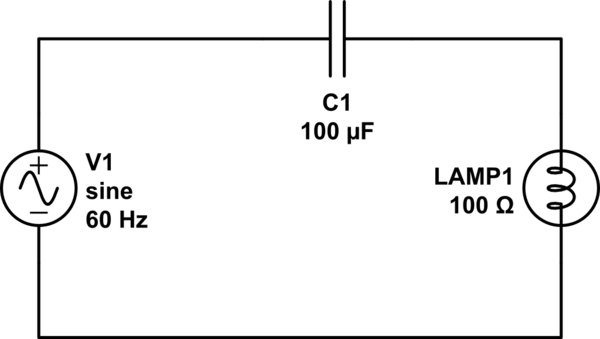 Actually, this could be a tricky question, because a light dimmer will typically have a pulse-width-modulated output, so assuming a sine wave, driving the cap and lamp would not be correct.

If you had a pure sine wave and simply wanted the Magnitude of the current, then you can compute the Reactance of the cap, and add that in series with the lamp resistance as a simple series circuit and compute the sine wave current. For example; Reactance = Xc = 1/ (2 x Pi x F x C) F = Hertz C = Farads

If R is the resistance of the lamp, in ohms, and the AC sine wave voltage is V, then the resulting Magnitude of the current, I is; I = V / ( Xc + R)

I use Spice for most complex circuits. It is a very nice program and there are various free versions. I use LT Spice from Linear Technology. Just do a search engine search and download it. It is very capable.

Hope this is helpful. xstack

The peak current will be maximum at about half way on the dimmer, when the thyristor is switching near the peak of the AC waveform. You'll get approximately that voltage divided by the light bulb resistance (which changes with voltage as it heats up so the actual maximum may be a bit lower than 50%). You can perhaps estimate it from the known hot resistance and measured cold resistance and some curves for incandescent bulbs. If you have a variac and an ammeter you could characterize it based on light bulb brightness.

Presumably the primary of your ignition coil is in series with the light bulb, but the resistance of the latter should swamp the inductance of the coil.

This is a bit of a dubious way to generate short pulses at double the mains frequency- and keep in mind that the output HV is likely connected to one side of the mains so it's an electrocution hazard even when turned down.

Capacitance of a single charged plate?