How do I combine multiple exposures for action shots?

I'd like to create one of those "stacked" action shot images where multiple exposures are combined to show the subject moving across a static background. Here's an example I found on Flickr (by Laurence Asuncion): http://www.flickr.com/photos/dfunkpinoy/2755832144/

Ideally, I'd like tips both for the photography part of this and for post-processing. For example, I'd imagine I want to shoot manual w/ the same exposure for all shots (as with a panorama), but I'm not sure if there are any other helpful tips for taking the shots. At one point, for example, I thought I'd have to tripod-mount the camera and keep the same framing for all shots, but I've now seen several examples where the composition moved from shot-to-shot.

I'm also interested in recommendations for post-processing -- software, technique, etc. I can envision a manual process where I stack layers and align them by hand in Photoshop Express, but I'd be surprised if there wasn't a better way — maybe using a pano tool like Hugin.

Everything that applies to shooting a panorama applies to shooting one of these. A tripod makes assembling more convenient but means you can't pan to follow the action. It's important to rotate the camera and not move your feet in order to make sure the shots line up. Locking the focus is going to be necessary. Same with shutter/aperture.

I've only done one of these, it could have been shot on a tripod but the location didn't allow it! I loaded the images in Photoshop, auto-aligned and then manually masked the overlap areas, this was quite easy as the frames are just the right distance apart to minimise overlap. A bit of overlap adds to the effect, too much can make it hard to see what going on.

Here are the original shots:

Photoshop's built in panorama tool has no trouble aligning the images:

A drop shadow has been added to show where the edges are. As you can see there was a little panning. I did not shoot the images but I did the post production (and modelling :) the actual photos were taken by a friend of mine. Here are the images blended together:

Here are the masks used:

I did a bit more blending, rotated the image, and filled in some missing sky/foreground and adjusted the contrast slightly, here is the final image:

I would be possible to automate the process of overlapping the subject by subtracting the common background areas and layering up the frames in chronological order.

You're right — Hugin works very well for this. This is from a series of pictures I took with a P&S Fujifilm camera at the Children's Museum. It's not an action shot except in the sense that all pictures of children are action shots, but the process is pretty much the same. 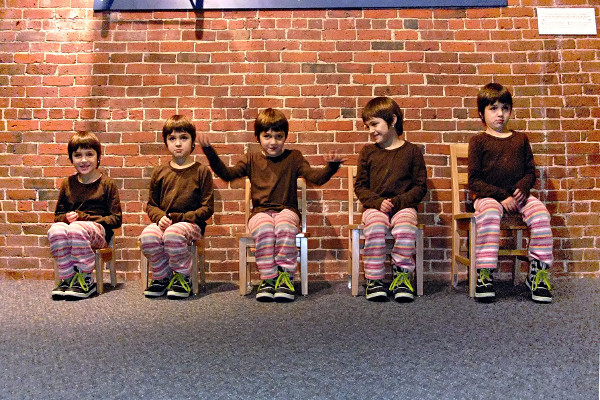 The images were all hand-held (braced against my knee), so there's pretty inevitable twists and turns between shots. Actually, since it wasn't really fast action, there's more difference than there might be in a burst. Hugin straightened that out, and adjusted the slight differences in exposure. The UI is really designed for people who know what they're doing, but I made it work anyway — selecting a projection and guessing at things until it came out right (which, despite the complication, just took a little experimentation). As a bonus, the considerable barrel distortion from the point-and-shoot zoom lens is turned into mostly-straight lines.

I took the resulting stack of images into Gimp as layers and erased through where my daughter is in each chair. Even though there's quite a bit of texture in the background, Hugin worked well enough that I didn't really have to worry about the overlap at all — it was all just smooth.

You have two excellent answers already, but as @Maynard has enquired about alternative techniques, there is another option if you have a flashgun with a stroboscopic mode:

This basically works by firing the flash multiple times during a single exposure to illuminate the subject as it moves across the frame. The downside is that you would need darkness or very low levels of ambient light to do this. However, it is much simpler as it can be done in-camera without any post-processing.

There's also an alternative application to Hugin: Autopano Pro by Kolor (http://www.kolor.com/panorama-software-autopano-pro.html) might be useful, but actually I am not sure how it would deal with the "differences", a.k.a. the motives you are actually looking for.

One of the method is actually to use panorama tool like PTGui for this purpose - it can help you avoid photoshopping trouble creating masks.

So for example you have a similar 5-7 action shot.

You load it in panorama tool PTGui - make alignment...

Then instead of actually doing panorama image - you just align source images; then you create not the panorama blend but rather a separate images - like layers in photoshop, They all would be aligned... If needed with adjusted image angles corrections etc.

Now all you have to do is load them in photoshop, in separate layers and erase overvlapping parts, keeping the subject (like skier) visible thorugh all resulted images...

Then you just blend them together....

Can I combine several low quality pics into one higher quality picture?

Is it possible to make a single still photo from a video?

How do you remove netting from the pictures?