How can I show that something is necessary, but can be done in any order?

I'm trying to model the rules of a rather complex game into a flowchart, so that newer players have an easier time understanding what to do when. The rules say that within your turn, you have to do certain things, but you can do other things first.

The current iteration of the flowchart has this basic structure: 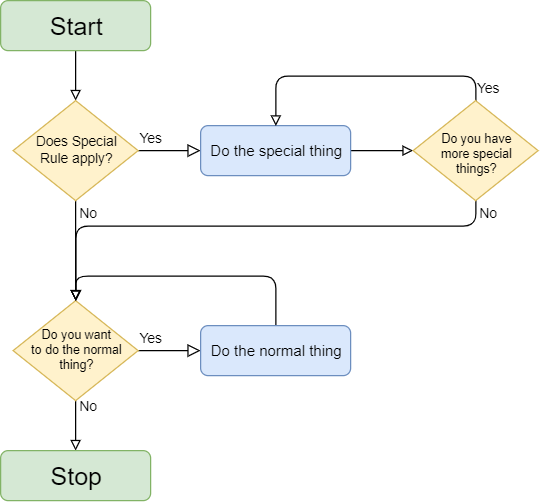 It first asks the player if "the special rule" applies to them, and then has them handle it. This process repeats until all special (and necessary) things are done. It then asks if they want to do "normal" things (they don't have to), and has them repeat that until they are done.

The rules, however, allow you to do some normal things first before doing the special things. You are only required to have done them at the end of your turn. How can I visualize this effectively?

To answer your questions try to do some low-fi wireframes to illustrate that to gain a better understanding of how this would work. It might be as simple as showing a pop-up with two options: Normal / Special . Do the normal one , after it is finished show the same pop-up with the special deactivated and only normal one active , do this until you can also show a "Finish turn" / "Skip turn".

Is providing technical documentation as to the mechanics of a game akin to having to having to explain a joke? It is a sign that the mechanics aren't intuitive or your game lacks "educational levels", training mode, or similar approaches to educating the User while playing. So my suggestion is to think about how you can lead the User to discovering such nuances while playing the game.

For a board game, perhaps a comic strip style view of a sequence of moves/turns that show that an imaginary player has leveraged a nuance(s) in taking their turn - sort of role playing an imaginary game.

Flow charts with lots of nodes

Is it appropriate to use a donut chart to show a User's score?

What is the most effective way to present advantages and disadvantages of mutually exclusive characteristics?